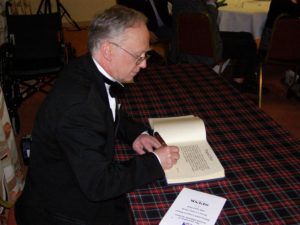 Douglas N. Muir is the Senior Curator of Philately at The Postal Museum in London, formerly the British Postal Museum & Archive and a signatory to the Book of Scottish Philatelists and the Roll of Distinguished Philatelists.

Muir was born in Balfron and subsequently attended Glasgow University where he studied geography and archaeology. His first job was as a language teacher in Pforzheim in Germany.

He worked as a philatelic journalist and Editor on Stamp Collecting, the Philatelic Magazine and then the British Philatelic Bulletin. He was also the founder of the Postal Mechanisation Study Circle.

One thought on “Douglas N. Muir”