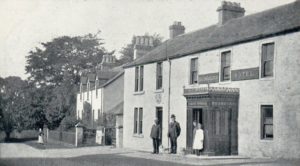 Colonel John Robert Dunkeld was born in 1898 in India, the son of Robert John Kerr Dunkeld (presumably of the Ballindaloch Hotel) and Mary Dunkeld. He had a sister, Janie Chrissie Alice Dunkeld.

John was the owner of the Ballindalloch Hotel.  In the picture, he is wearing the bowler hat.

John joined the Argyll and Sutherland Highlanders, as myth has it, as a drummer boy. In the 1st World War, he was blinded in one eye and received shrapnel in the brain which gave him headaches for rest of life. Reports suggest he may have received his commission in the Labour Corps, served in the Cameronians and also in the Royal Artillery. He was promoted Lieutenant Colonel in the Argyll and Sutherland Highlanders in January 1946 and retired in that rank.

I have been unable to verfiy a report that he was awarded an OBE for a secret mission for Eisenhower in the 2nd World War, but he was listed in the 1946 New Years Honours (Lieutenant-Colonel (temporary) John Robert Dunkeld (136168), The Argyll and Sutherland Highlanders (Princess Louise’s)).

John died in April 1965 of a heart attack in Balfron, where for many years he was the local councillor. Dunkeld Court was named c1985 after him