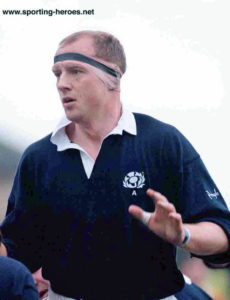 When professional rugby started in Scotland in 1996, Campbell first played for the Caledonia Reds. On their merger with the Glasgow side he then turned out for Glasgow Caledonians in 1998.

He then played for Treviso in Italy before moving to England to play for the Leicester Tigers and then Yorkshire Carnegie.

He played for Scotland at various age grades, the Club XV side, the ‘A’ side and the Scottish national team.