The village of Balfron developed in the 19th Century, during the Industrial Revolution, a cotton mill. The Ballindalloch Cotton Works was built on the River Endrick and a planned village was constructed on both sides of the main road between the river and the Clachan to accommodate mill workers.

A bleachfield was created and on the other side of the river in the Parish of Killearn, Endrickfield Printworks was built by John Monteith & Co., in co-partnership with Robert Dunmore, for the printing of calico. Although the works were in Killearn Parish, the workers lived in Balfron, in that part of the village which still retains the name Printers Row.

In about 1861, the Rev. Alexander* Niven describes Ballindalloch Cotton Works:
An extensive Cotton work on the banks of the Endrick Water, the building varies from one to six storeys in height and was erected in 1789. The machinery is propelled by water of about 30 horse power. This work employs about 250 persons when in full operation, chiefly females. Property of W. and A. Jeffrey, Balfron.

He also describes the school:
A two storey building in the village of Balfron, used as a School for the education of the children employed at Ballindalloch Mill, the ground floor constitutes the School Room, the upper Storey as the Teacher’s residence, the number of pupils depends on the number in employment at the Mill. The Teacher receives his support from the Mill Owner, the education afforded consists of Reading, Writing and Arithmetic.

The Works were described in 1844 in the following terms:
“Ballindalloch Cotton Works, situate in the Parish of Balfron, and the county of Stirling, 19 miles distant from Glasgow, containing 10752 mule spindles, of which 1248 are self-acting (Smith & Orr’s patent), with the necessary preparation, driven by a water wheel 28 feet diameter, calculated to be equal to 35 horse-power, with a steam engine to assist in dry seasons of 16 horse-power, the supply of water being obtained from the river Endrick and from a reservoir covering 30 imperial acres … The total extent of land, including site of works, dwelling houses, &c., is about 77 imperial acres …”
The 77 acres were divided into two areas, 35 for the works, etc., and 42 acres further down stream which were used for many years as a printfield. Finally there was one other acre belonging to the works which had a large school house with a dwelling above it.

Previous to the year 1780, this parish was, strictly speaking, rural. Agricultural pursuits occupied the population, if a population could be really said to be occupied, who were of necessity compelled, from the low state of agricultural pursuits, to pass fully the half of their time in idleness. But in the year 1780 a very material change took place in the parish, by the establishment of an agency for manufacturing calicoes, under the influence and patronage of a very enterprising and intelligent man,— the late Mr Dunmore of Ballindalloch and Ballikinrain, in whom were united the activity of the country gentleman and the liberality of the merchant; and to whom this part of the country is indebted lor many valuable improvements, of which certainly not the least are its high-roads. The calico establishment, however, did not turn out very satisfactorily; Mr. Dunmore, therefore, formed a connection with the Buchanans of Carstone in Killearn parish, who had just then built the Deanston Cotton Works, near Doune, in Perthshire; and with these gentlemen, in the year 1789, he built the cotton-mill in this parish, known in trade by the Ballindalloch Cotton Works. Mr. Archibald Buchanan, the younger of the two enterprising and ingenious brothers, the partners of Mr. Dunmore, had been taught the practical parts of cotton-spinning at Cromford in Derby, under the well known Arkwright, the original inventor of cotton-spinning by means of machinery. In the year 1789, cotton-spinning was, under this company, introduced into this parish, and from that time, down to the year 1793, was successfully carried on by them. But in the year 1783 (?), Messrs James and Archibald Buchanan transferred the property to Messrs James Finlay and Company, merchants, Glasgow, who still (1845) continue to be proprietors, and who, at their several works at Deanston, Catrine, and Balfron, give constant employment to 2500 hands. The works at Balfron are driven by a stream from the Endrick, which, in dry seasons, is kept nearly uniform by water from a reservoir of 33 Scotch acres, constructed about thirty years ago, in Dundaft* Moor, one of the oldest estates of the Montrose family, and contiguous to the ruins of the castle of Sir John De Graham, the friend of Wallace. This stream falls on a water wheel of almost 30 horse power, which drives 12,000 mule spindles with their preparations. Two hundred and fifty-eight hands or thereby, and these chiefly females, are now employed at the works. It is understood to be the first cotton work in Scotland at least, in which female spinners were exclusively employed.

In the year 1792, Messrs John Monteith and Company, of Glasgow, established and carried on for several years an extensive printing-work; but it was found to be too distant from coal to be conducted with advantage. It was therefore abandoned. The site and property were purchased by the proprietors of the cotton works, Messrs James Finlay and Company, and have not been again turned by them to any manufacturing purpose. 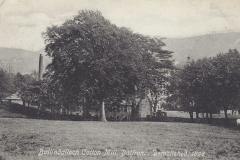 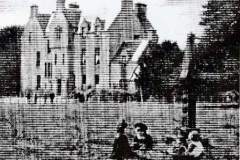 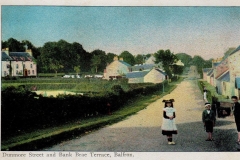 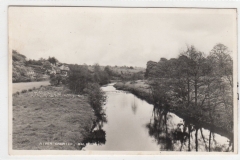 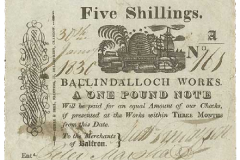 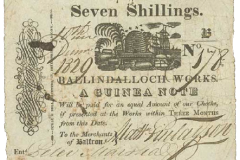 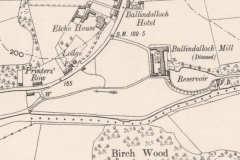