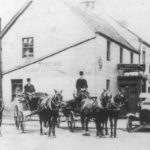 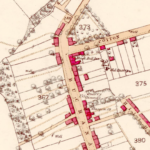 The 1865 map shows the Black Bull Hotel on this site. 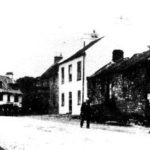 The Tontine Hotel is the dark building beyond the white house, Rockbrae, home of Mrs Veneables, who managed the shirt factory.

David and Agnes had 2 sons: John and jim, and a daughter, Mary.

A tontine was a type of lottery in which the longest lived participant won the big prize. In this case he possibly bought the pub with it, but it could be it was held as a 'tontine'.